NOW YOU SEE US NOW YOU DON'T

The city, the camera, the dog. And what it saw. The city knows. It takes its time. It observes what's happening. It recalls what's been going on. It may even intuit what's next. We can't check because the city won't talk to us humans directly. Still we get a sense that the places we cross every day may have a mind and memory of their own. In some places something is in the air that would suggest that much. And it's not necessarily because these places were marked by monuments or otherwise charged with an aura of historical significance. On the contrary, it may precisely be those blank spaces in the urban fabric where a city's consciousness would seem to linger, those spots where roads cross at strange angles, leaving sidewalks too wide and patches of ground without proper use, so that, helplessly, people may put a bench there, to hide how empty the pavement feels. It may also be fenced off pockets of the unbuilt or bombed and never rebuilt between houses or unkept bits in parks that people still visit not because there were actually nice but simply because, for whatever reason, they are still there. It is in these patches, bits and pockets that the peculiar time and tempo at which a city thinks and remembers might be sensed: Because these places are not crowed by interpretations (guided tours leave them uncommented and history looks elsewhere) the city is free to keep its senses alert and, as the planet turns slowly, accumulate awareness.

In her photo series Reversed (Now you see us now you don't) and the video I am the dog that was always here (loop) Annika Eriksson taps into this particular state and temporality of urban consciousness. She addresses the non-anthropocentric dimension of the awareness a place may create of itself, at its own pace. She does so by letting different mediums channel this peculiar spatiotemporal experience: the camera, the dog and the poem.

Reversed (Now you see us now you don't) are black and white photo series, displayed in groups of three. They are pictures of precisely the somewhat blank, forlorn urban locales described above. More than pictures, they are testify to a camera's automatic way of taking in the world, without composition, maybe not even entirely in focus. Crucially, all images are reversed. So what you see, quite literally is what the reflex camera saw in its internal mirror-eye, not what the person taking the picture perceived. Like the recording of a voice played backwards, the reversal adds a touch of the spooky. This is because reversed realities become eerily concrete, as this word does, when I spell it backwards: e-t-e-r-c-n-o-c, turning each letter back into itself, making an e an e, a t a t, an e an e, an r an r, a c a c, an n an n, an o and o, a c a c. What if this was how the city saw itself? Mirrored in itself, rendering space and time infinitely concrete, the literal consciousness of a place might leave words scrambled and permit itself to be uncrowded by false interpretations. We wouldn't know. But the camera may. It is a thing, and hence partakes in the way the material world exists, by and for itself.

I am the dog that was always here (loop) summons a different set of witnesses. Live witnesses, yes, but non- human too. The video shows packs of dogs on a derelict ground in the countryside outside Istanbul. They roam around the space and do what dogs do. They keep busy, fighting, playing, sniffing each other and surveilling their surroundings. It's lots and lots of them, big and small ones, of different mixed breeds, city street dogs, attuned to the needs of their survival and visibly in charge of this pocket of space that no one seems to own or want. On the voice-over, a speaker enunciates a text in Turkish in a smooth melodic tone, accompanied by

English subtitles. It's the dog speaking. Which dog? The dog that was always here. It says so. And you feel it too. Because what carries its speech and renders it sublimely poetic is a sense of time and place that exceeds the limits of any one living consciousness. This dog of dogs knows the city because it is the city. It has lived and died with the place, risen like its buildings, and perished with its disasters, always to return. Even though, the dog says, that it and its kin have been captured and moved out from the center to the periphery, it will persist and come back to those streets, after those who wield power over them will long have passed away. The city dog will fight back and survive the forces any police could put up. Its resilience is infinite. Because the time of the city dog knows no end. It goes in circles. Like its poem does, as it repeats and repeats, while the images change. The place of the dog? Place for the dog is a deep knowledge alive in its body like the energy pulsing through its veins that keep the dog watchful, playful and on the go. Would we know for sure that this is what the dog of dogs thinks. No, because, like the consciousness of places the dog of dogs wouldn't use ordinary human language. But, like the camera partakes in the life of things, poetry may convey a touch of the not- altogether human, as its depth evokes more memories than an individual human could recollect. In its rhythm and melody one senses the echoes of more than one life lived, more than a single mind could contain: a collectivity of life experiences, perhaps even the living experience of a whole city. So the camera sees and the dog speaks as it roams around. As mediums they may very well be the ones to channel that peculiar collective consciousness a place might generate of itself in its very own proper time — Jan Verwoert. 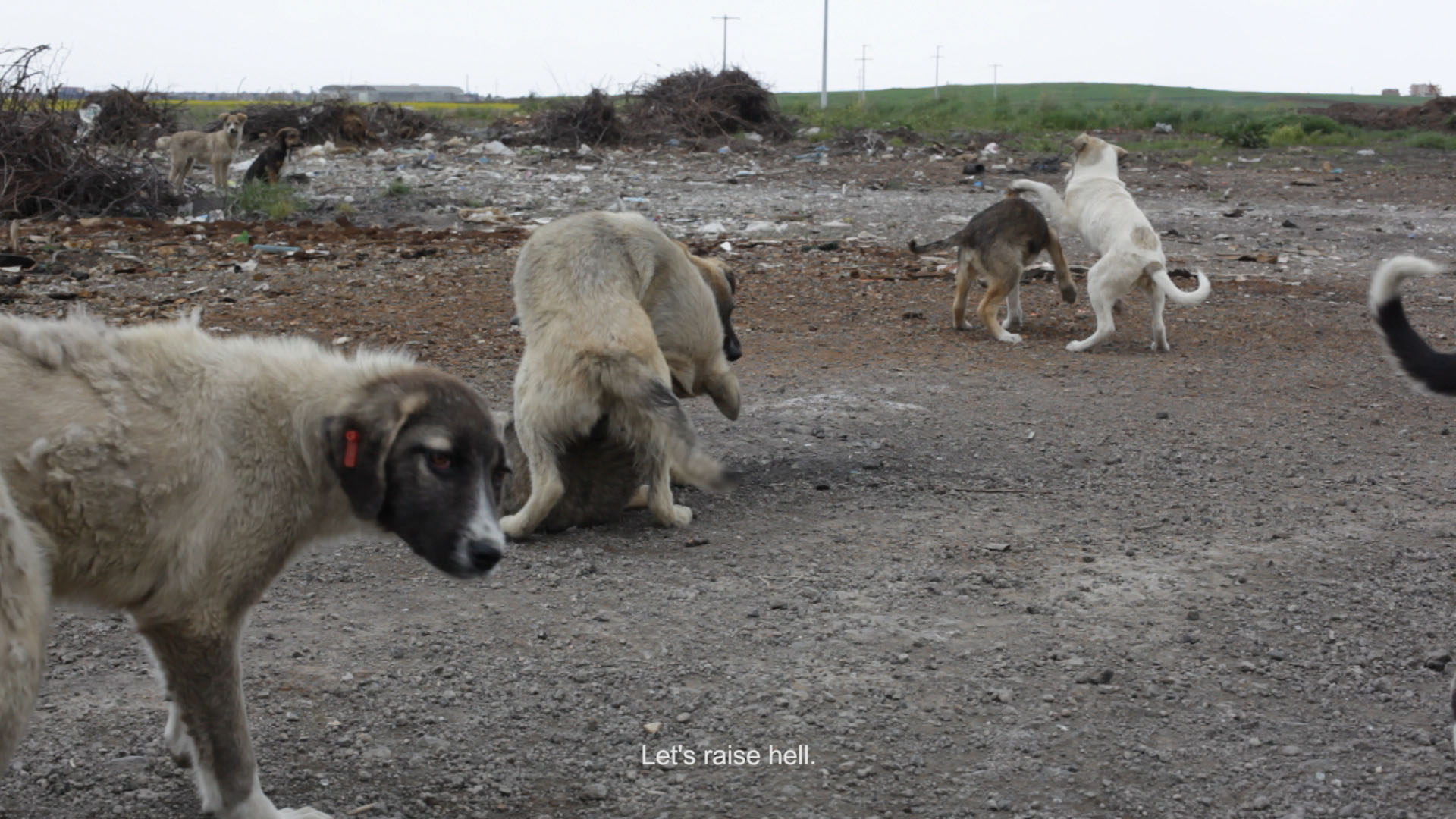