Abstraction is never complete. Maybe it once was, in more modern times, as it was still tied to the utopia of reconstructing a future humankind. In our present, where these reconstructions are heaped onto a past that cannot be overcome, abstraction is always inadequate. Reconstructing the human—in its latest, digital, algorithmic form—allows the human itself to become an abstraction, to which now we, its material remains, are consistently unequal. Abstraction lost hope for its realization; it became historically lopsided. In Michael Hakimi’s work, this imbalance is the starting point of a reconstruction. Abstraction doesn’t emerge to abrogate figuration, it rather turns its inherent symbolism outward: each form, still so simple, resembles its cultural function, its life as advertiser, logo, brand name, gimmick, icon, detritus. Abstraction, in association, topples over; it is at once elegant and awkward.

Hakimi’s “Modern Taking” unfolds this symbolic life of abstractions, and the ever- present digitality of our present provides its basis. The insight, recounted sometimes in horror and sometimes as a promise, that material life today is subordinated to its digital form, loses its moralistic undertone in Hakimi’s work. The small-format pigment prints “The world doesn’t need me” and “Yalla” (both 2015), which Hakimi produced with the Illustrator computer program, recall his inkjet prints from the early 2000s. These were also composed of synthetic forms, vertically arranged ornamental interfaces of abstractions and figurations. But while Hakimi’s large-format early computer images emerged in strict two-dimensionality, like posters of a still-to-be realized movement, the new iconic small-format Illustrator drawings appear rather in three-dimensions towering out from the recently deceased—a kind of visual appendix of the digital afterworld, an abstract accumulation of symbolic figurations. And as the symbolism of early twentieth-century Surrealism always presented its author’s unconscious as a personal reversal of the social, Hakimi too inverts these standards. His icons are surreal because the unconscious, the piled-up remains of the day, emanates from the digital drawing program. Their forms are generic, and it is exactly this genericness that locates them at the center of what today emerges as the personal. Hakimi does not assemble abstractions from the personal, but rather abstractions of the personal.

In the series of black jute and canvas images—“Scheibenwischer,” “Pyramide,” “F,” and “Spirale” (all 2014)—this relationship returns in the form of a serially staged mark. Here however the mark, the classic recognition motif of the painterly—which, according to Isabelle Graw, still guarantees the identifiability of a work—is detached from its identification with the artist. Hakimi does not perform his own appearance in the image, but rather becomes, with stencils and spray paint, the vehicle of a mark of forms on his images’ coarse surfaces that are covered with black acrylic lacquer. The forms that we see are again basic forms that glide across the different travesties of their symbolic contents. However they remain isolated. Set free, and refined by a golden hue, they once again turn the inversion of abstraction and figuration upside down. Each of these figurations, they demonstrate, can once again be rudimentary in its isolation. An abstraction lies within, and its symbolic emergence is figurative only in the immediacy of the first glance. The second glance reveals the golden forms on the raw surface as abstractions whose figurations are consistently set, reconstructed, and reinserted by the new. Michael Hakimi’s works time and again give rise to such iconic panoramas, in which the personal and the social fall into flux, and figuration and abstraction are swept away. 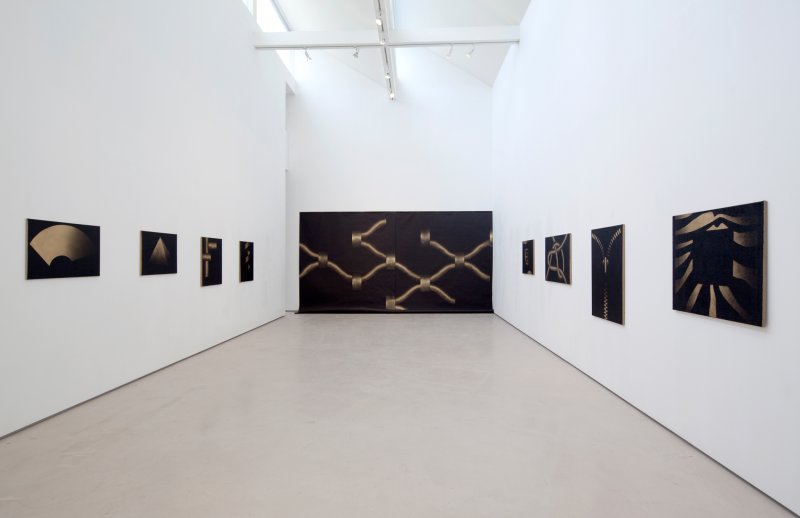 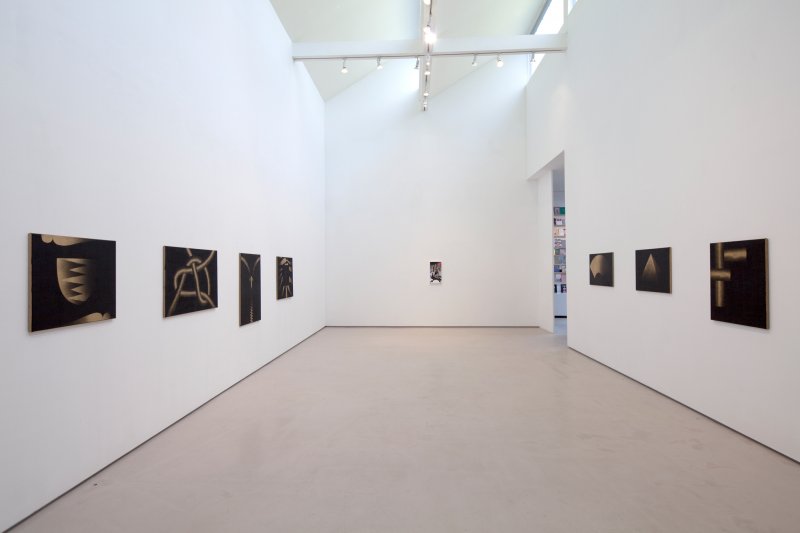 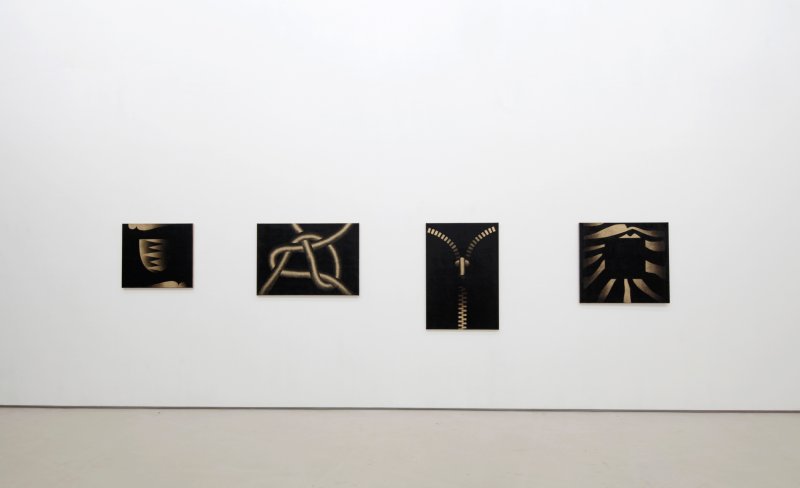 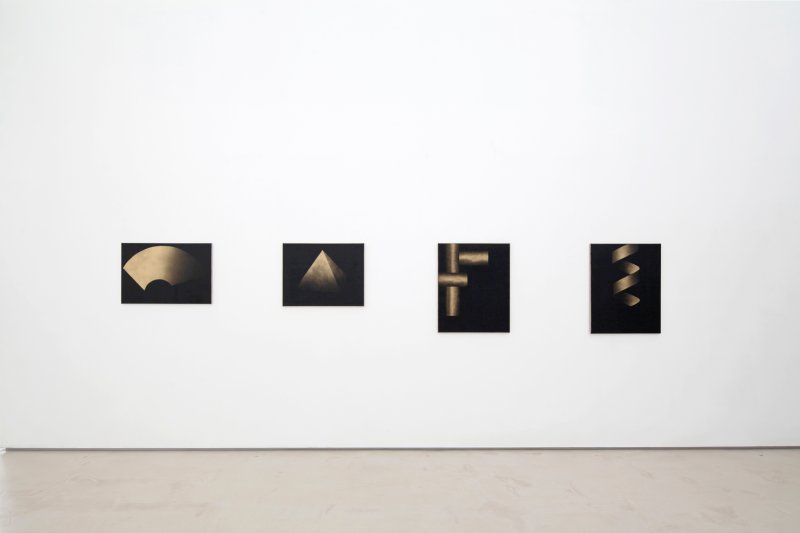 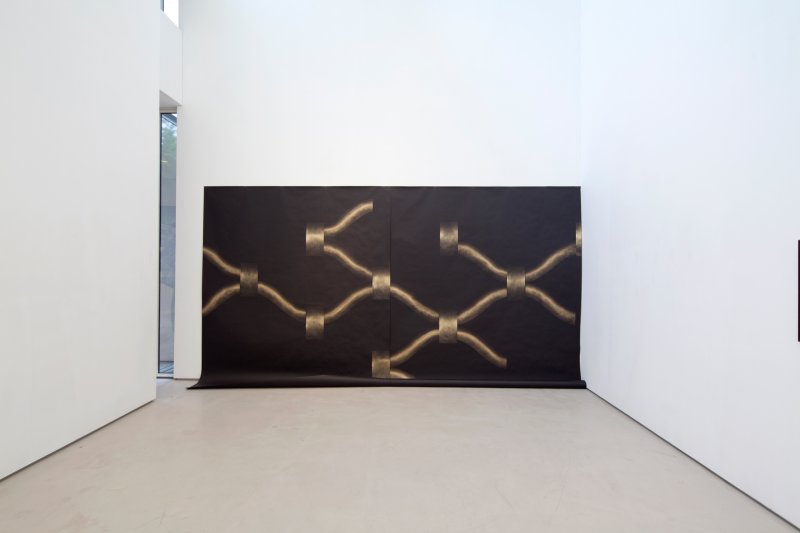 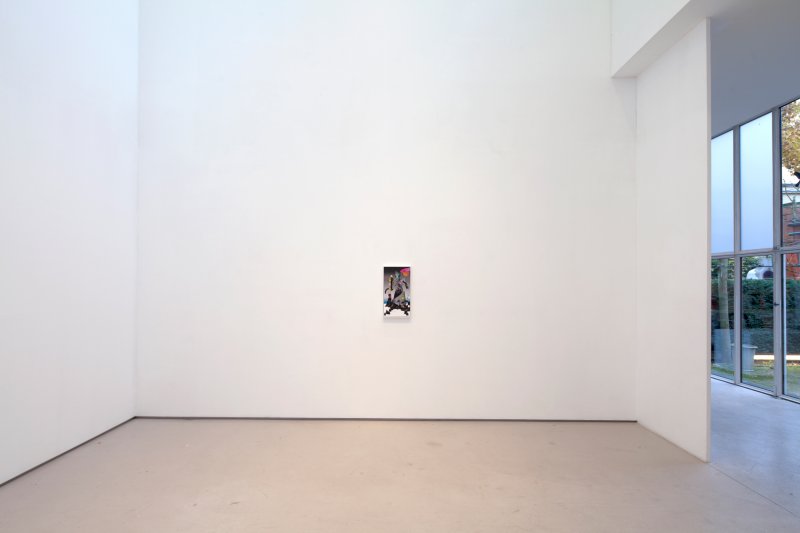 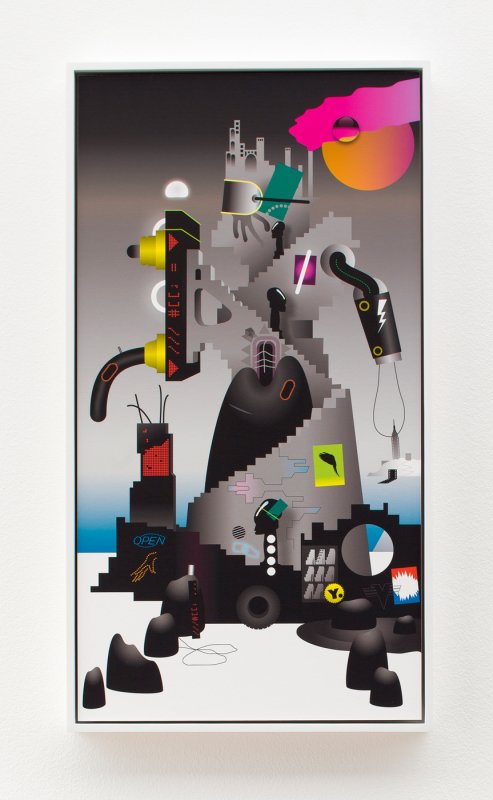 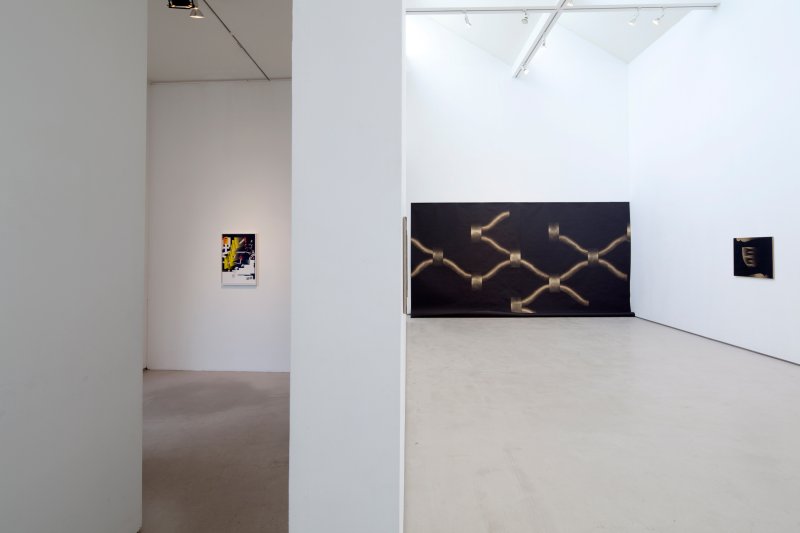 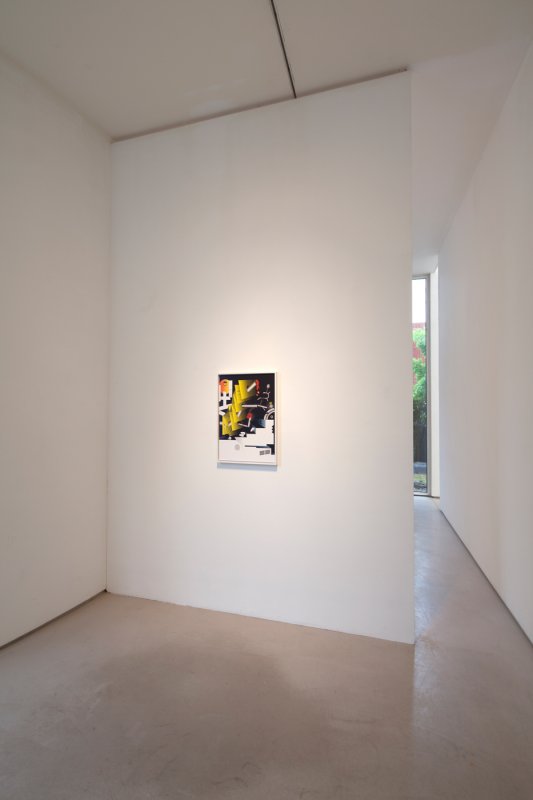 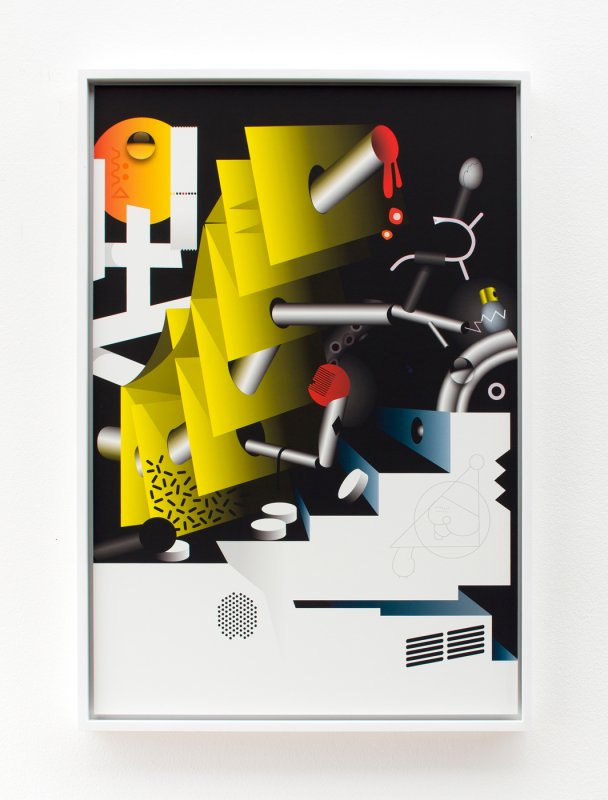 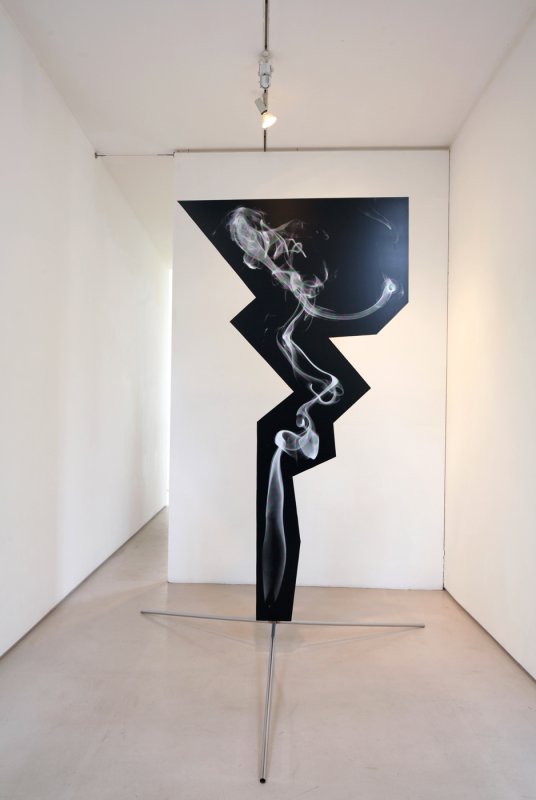 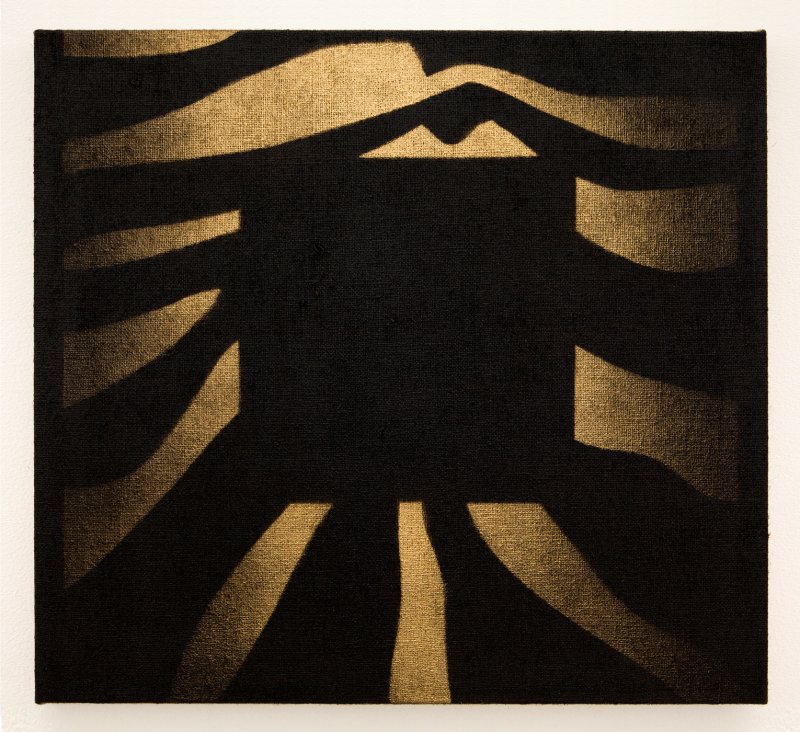 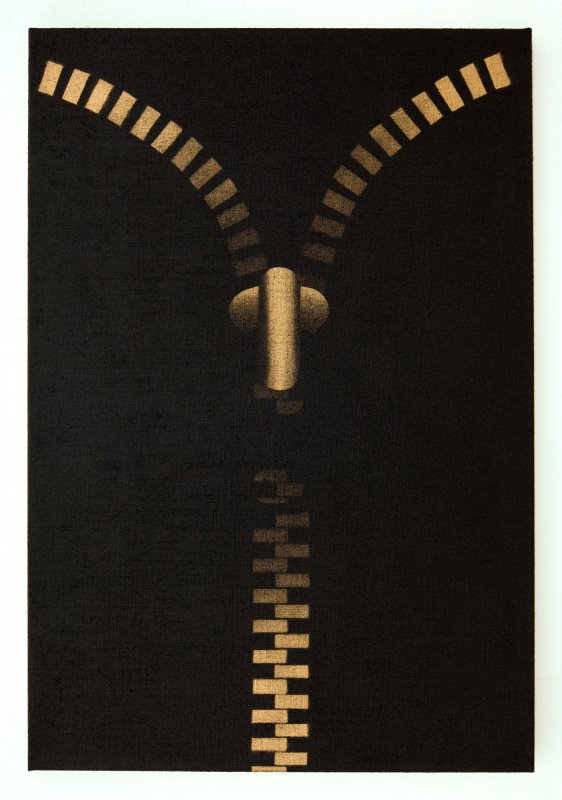 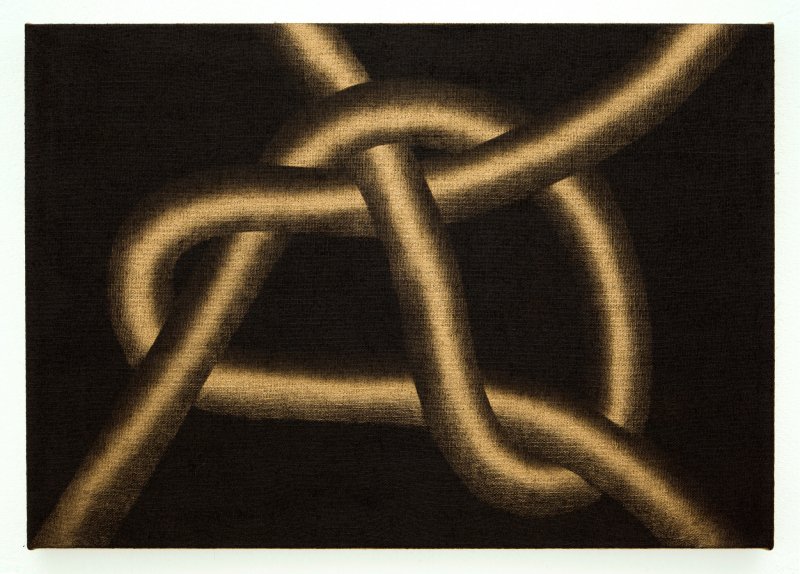 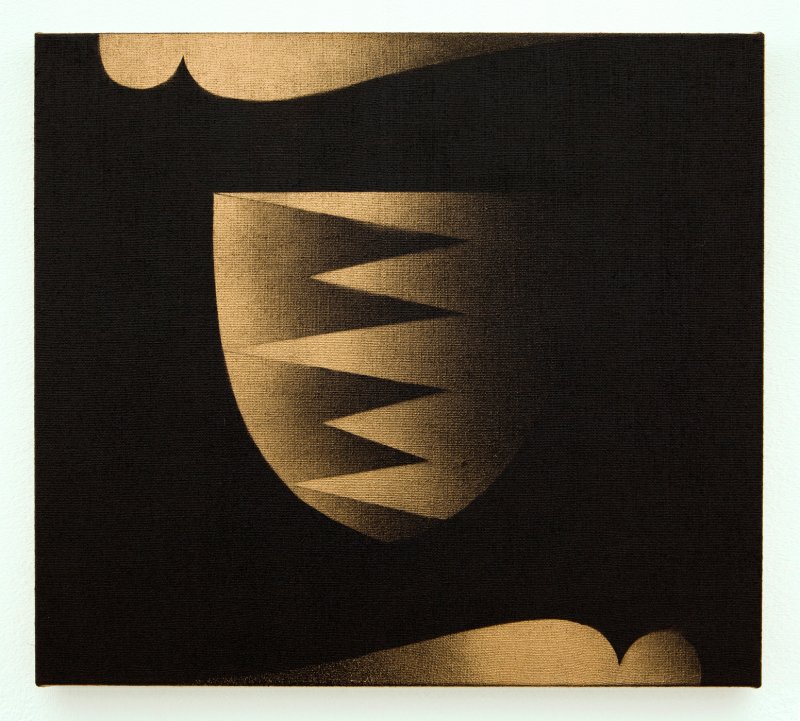